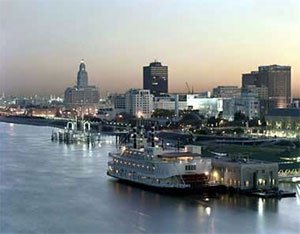 Stine Home & Yard has been serving the fine residents of Baton Rouge,Louisiana with the best appliances since 1946!

The Baton Rouge area, also known as the "Capital City", is located in the southeast portion of the state along the Mississippi River. The area owes its historical importance to its site upon Istrouma Bluff, the first bluff upriver from the Mississippi River Delta, which protects the city's residents from flooding, hurricanes, and other natural disasters. In addition to this natural barrier, the city has built a levee system stretching from the bluff southward to protect the riverfront and low-lying agricultural areas.

In the 1950s and 1960s, Baton Rouge experienced a boom in the petrochemical industry, causing the city to expand away from the original center. In recent years, government and business have begun a move back to the central district. A building boom that began in the 1990s continues today, with multi-million dollar projects for quality of life improvements and new construction happening all over the city.

In the 2000s (decade), Baton Rouge has proven to be one of the fastest-growing cities in the South in terms of technology. Baton Rouge's population temporarily exploded after Hurricane Katrina, as it accepted as many as 200,000 displaced residents. Metropolitan Baton Rouge is one of the fastest growing metropolitan areas in the U.S. (under 1 million), with 602,894 in 2000 and 802,484 people as of the 2010 census. Some estimates indicate that the Baton Rouge metro area could reach 900,000 residents as soon as 2013.

The city has a mix of the cultures found throughout Louisiana, from which it developed its motto: "Authentic Louisiana at every turn".